This is the coolest Toyota I have ever seen, but unfortunately…
Published on: Jul 8, 2021 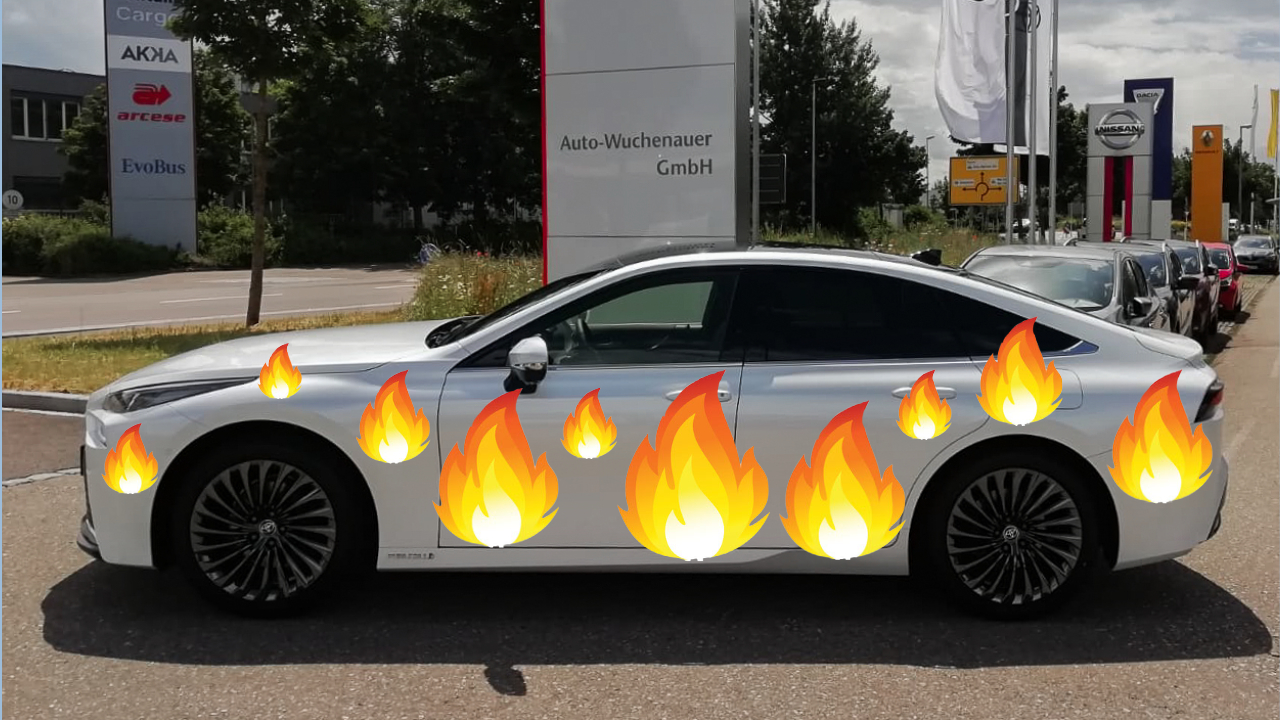 “…it doesn’t have jet propulsion, a cannon, or armor.” That was my second son’s first comment about the new Mirai. He is four years old. I think he wishes we’d put flames on it instead of the company logo.

But seriously: I’ve been driving the car for almost two weeks now and about 1,600 km. Life as a hydrogen driver is interesting. I see that a lot of things are going well, but there’s still room for improvement in a few places. The fueling station authorization card, for example, has a double arrow on it, but guess what: you have to insert the card into the card reader the other way around. In other words, against the direction of the arrow. Ok. Maybe I should have done the video training after all. It seems to be necessary.

The rule of thumb for the consumption of hydrogen cars is 1 kg per 100 km. In the Mirai brochure I think it says something about 0.8 kg per 100 km. My first trips were almost 100% Autobahn, and empty German Autobahn to be precise. I’m not a speeder, but when the autobahn is empty and dry and the sun is shining, I don’t drive 80 km/h in the middle lane. Makes sense, right? Conclusion: at about 150 – 160 km/h the consumption is about 1.6 to 1.7 kg per 100 km. That hurts. Multiply it by € 9.50 per kilo of hydrogen, and the fuel cost per 100 km is just under € 16. That corresponds to a diesel consumption of about 12 liters! A normal E-Class manages the same with 6-7 liters.

In the city, the car can then show its efficiency advantages: my initial experience shows that 0.7-0.8 kg/100km is possible. That is about 7 euros per 100 km.

Of course, I am still an exception with my hydrogen car, and I know that I will have to overcome challenges sooner or later. That is my self-chosen fate. I have chosen the real world experiment to find out: Where does hydrogen really stand? Does it have a chance? What do we have to do? Is Mr. Diess from Volkswagen right, who thinks hydrogen cars are nonsense?

Speaking of Mr. Diess, he was recently asked in an interview whether he thinks Tesla is overvalued on the stock market. His clear answer: “Tesla is not overvalued, Volkswagen is undervalued.” And since then, he’s done nothing but blow the electric car horn for VW, and the share price has risen unceasingly. Interesting relationship. The Youtube comments on his ID3 don’t actually support it. There’s a lot there in the “devastating” category, especially with regard to the software. The software, by the way, is what Tesla definitely masters. Nine years ago, they were already much better than Toyota is in their Mirai today. But I will write about that in a future mail.

My conclusion for today: The Toyota has already brought me to a gas station seven times in the last two weeks. I’ll have to add up the costs, but they’ve been significant. Especially because I charged the Tesla for 5 Euro flat rate at our local power company, and I could have charged at least three times for free in hotels or at customers. But I pay the money without discussion, because it is part of my experiment. And in the end, it’s not about me, it’s about the future of mobility.

PS: I’ll be talking about my experience in a webinar soon. The date is not set yet, but if you register for the largest hydrogen conference in the world, the Hydrogen Online Conference, for free, you will definitely get an invitation: www.hydrogen-online-conference.com.