Five Teslas waiting in line at the Supercharger
Published on: Oct 27, 2017 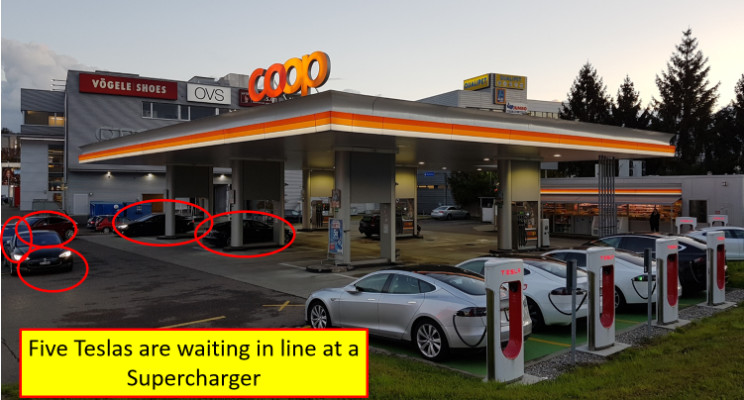 Today I was in Switzerland for a customer meeting. They produce decentralized methanol power plants. Very interesting technology. But that’s not my point today.

On my way back I had a break to recharge my Tesla. Actually: I had to have a break. I could imagine better ways to spend my time than hanging around at a gas station in an industrial area for 45 minutes after a long day. But ok, it could have been worse.

Shortly after I had started charging, two other Teslas arrived. Then all Superchargers were occupied. Bit by bit, more Teslas arrived until there five of them were standing in line. FIVE!

Let’s do the math: I was there for like 45 minutes. No other car came after me and left before me. It was the other way round: some Teslas had been there already when I arrived and were still standing there when I left. I guess they had gone shopping in the shopping center next door. Or they were buying a new bed in the furniture store on the other side of the road. I have no idea.

Anyway: The first guy started charging after some 10 minutes. The second guy got my charger after some 20 minutes. I am sure the last guy in the line had to wait for more than 30 minutes doing nothing to start charging. Add some 30-45 minutes for charging and you see that he had been hanging around for more than one hour at the gas station.

And yes: 6 Superchargers have a power of around 650kW. Not every street can handle that. And twice as much would have been just right on this regular Friday evening in that suburb of Zurich.

Did anyone say Hydrogen is not a good fuel for the future?