How Hydrogen Refueling Stations could become faster and more reliable
Published on: Jul 31, 2017 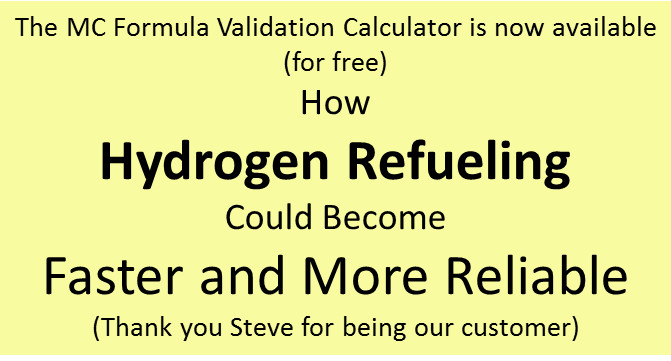 Many of you know that Honda R&D USA and Japan have been working with Wenger Engineering for a long time to make hydrogen refueling faster and more efficient. The approach is called “MC Method” or “MC Formula.” Honda is the inventor, while our job has been to improve it and make it as efficient, robust and safe as possible.

Now the “eagle” has landed. Maybe it’s not one giant leap for mankind, but it’s definitely a good step forward for the hydrogen economy. 🙂

Honda has decided to publish a software that would help station designers and engineers apply it correctly. This software is available for free HERE.

The only restriction is that you have to log in because Honda wants to know who will be using it in order to communicate with the user to help improve it further. A fair deal, taking into account the value you get.

The current version (Version 1.0) of the MC Formula Validation Calculator should be considered an “alpha” version. The intention is to have as many interested people as possible to utilize the tool and provide feedback so that a more refined and final version of the tool can be produced in the near future. The timing of the final version of the tool should align with the publication of the revised CSA HGV 4.3 standard, which the validation aspect of the tool is intended for.

Here’s what it is about:

MC Formula is an SAE J2601 standard fueling protocol, available in the 2016 edition of SAE J2601. It calculates a dynamic pressure ramp rate using adaptive feedback control based on the measurement of pressure and temperature at the dispenser in order to minimize the fueling time. The end of fill pressure target is also continuously and dynamically calculated throughout the fill.

How can the MC Formula improve H2 fueling?

The benefit of using MC Formula to the FCV customer is less time spent fueling. The benefit to the station manufacturer is enhanced design flexibility, along with potentially lower capital and energy costs, and higher energy efficiency. And the benefit for the station owner/operator is higher customer satisfaction.

How can the MC Formula Validation Calculator be used?

The MCFVC can be used to validate that a hydrogen station is applying the MC Formula fueling protocol correctly, as defined in the 2016 version of SAE J2601. It can also be used to assist with the initial programming of MC Formula into a dispenser PLC, as all of the equations are listed and can be copied from the tool, and all the correctly calculated parameters of the MC Formula protocol can be exported to a file, the values of which can then be compared to the station’s calculated values.

If you are a station owner, developer, operator, or similar, please download the calculator HERE. If you are just interested in the progress, you may find the manual helpful.

Please share this post with your friends in the hydrogen industry to make sure they know the state of the art.