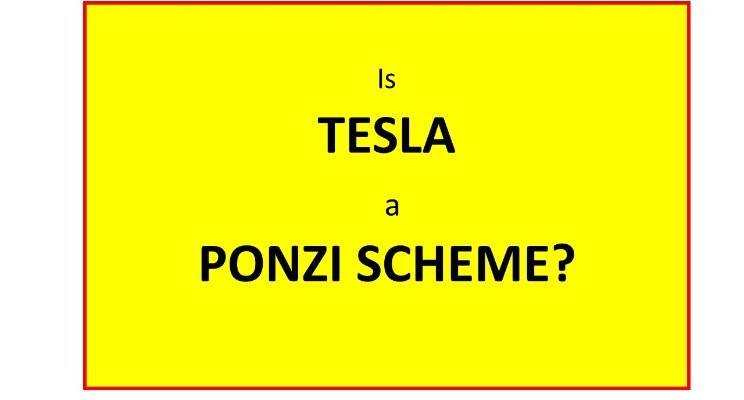 I hope I haven’t shocked you too much with my headline. However, I really asked myself that question. Not because I want to blame somebody, rather because for me, being a “normal” entrepreneur, some things look a little bit odd at the manufacturer of my car.

Recently, an interesting book has been published: “Adele Spitzeder – Der größte Bankenbetrug aller Zeiten” [English: “Adele Spitzeder – The biggest bank fraud of all times” – I don’t know if it has been translated yet] by Julian Nebel. A woman called Adele Spitzeder has established a “bank” in the 1860es in Munich, Germany. The business concept was to give the customers interest rates of 10% per month. Tens of thousands of people gave her money, and everybody wanted to work for her. That worked until 1872, when she did not get enough new customers, the Ponzi Scheme became obvious and there was a lot of drama.

Shortly after the book was published, Tesla published their quarterly report. Losses of 619 million Dollars. That’s 480000 Dollars per hour. 8000 Dollars per minute. Production of 22 cars per day instead of 5000. And as if that would be enough homework for a company, Elon Musk presented a new supercar that has more capabilities than any competitor. And an all-electric truck that dwarfs every other truck on the planet. Date of delivery: unknown. But you can already make a down payment.

Do you see the similarities as well? I have a deep respect for Elon Musk. I couldn’t sleep well at night if my company lost 619 million in one quarter. And I would not be able to plan a mission to Mars and an underground tunnel system at the same time. When I listen to our automotive customers I know: I am not alone with my respect for Elon Musk. But seriously: Could it be that people like Piech, Zetsche or Lutz are right? Could it be that all experts are right: “If you don’t make money on luxury cars, you shouldn’t try it with compact cars.”?

I don’t know. I wish Tesla all the best. Because I do not want to be left behind with a car without manufacturer.

I wish you a successful day.

PS: The book is available on Amazon: Link