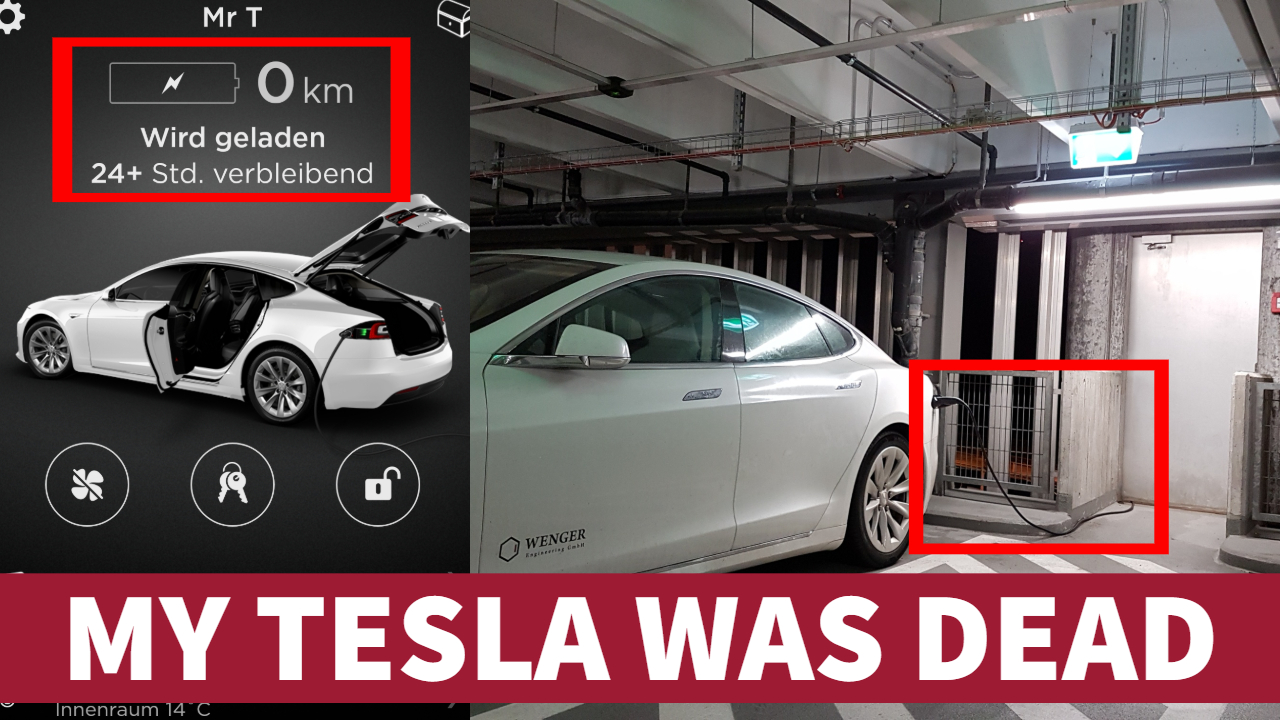 I have just experienced the worst case: My Tesla was dead. 0 km left. No more power. Zero range.

Ok, maybe it was not the worst case ever: I am still alive and my family is fine, too. But with respect to mobility: a pretty bad scenario.

Here’s what has happened: We were on a family holiday and had left the Tesla in a parking garage at the airport. Range: 80 km. Not too much, but still enough. That’s what I thought. I was wrong.

When we came back after one week, the Tesla didn’t react. I thought the battery of the key was empty, so I went to a shop, bought a new battery and tried to open the car. Nothing.

So I called Tesla. “For sales, press One. For information on the Model 3, press Two. For service, press Three.” Ok, Three. After like fifteen minutes in the waiting line, I decided to press the “Sales” button. Surprise, surprise: After 10 seconds, a Tesla employee was available. I described my problem, and that poor sales guy tried to help me with my problem while trying to call the service hotline himself. After hanging around at the airport for like two hours I got an answer from the service team: my battery had been discharged for six days and there’s nothing they can do.

I called the roadside assistance. They came, disassembled the Tesla to charge the 12V battery and I was finally able to open the doors and get a full understanding of the problem I had: I was on the 7th floor of a parking garage with zero battery power, a roadside assistance guy that was friendly but didn’t have the tools to charge my car or help me to get it to the Supercharger.

Here’s what I did instead: I found a normal socket in the emergency exit of the parking deck. Then I went to a supermarket, bought a cable drum, connected the car and went to a fast food restaurant in the airport with my family. After one hour, I still had “0 km” on my display (the charging power was a stunning 2.5kW). However, I knew that an 11kW charger was in another parking garage at the airport. But that meant I had to drive around the airport with a display saying “0 km – You are out of range of any known charger”. But who dares wins, and with the last electrons and more adrenaline than blood in my body I made it to the charger. I connected the Tesla, and after another 45 minutes I had like 10 km on my display. Enough to drive to the next Supercharger. I picked up my family, went to the SC and charged for another 45 minutes.

After seven hours of calls, constructions, driving on public roads with no range left and charging sessions my family and I were able to do what our initial plan was: drive home.

I tell you, guys: Life as an early adopter is an adventure. In general, I like it. But if my wife and kids have to hang around at the airport for seven hours, it’s more like “Ok Elon. It was an interesting experience, but now give me back my normal car, please.”

Have a nice day

(Update: Of course I called Tesla to find out what the problem was. Unfortunately the service guy at the other end of the line was not very sympathetic: “This is your problem. No, I don’t know what has happened. The losses in winter are massive. You should have known. You should have read the manual. The cost? Your problem.” I said: “Ok, I am very sorry. I am part of the 99% of the population who don’t read the manual of a car. I have other literature I prefer. Why don’t you tell the customers about these things? Or why doesn’t my Tesla stop heating the battery or the interior when the range is ultra-low?” “I don’t know. There’s nothing I can do.” Welcome to Germany. Maybe that would be a good challenge for Elon: Make Germans customer oriented. 😉 )