The first million is the hardest – Congratulations, Mr Musk
Published on: May 12, 2020 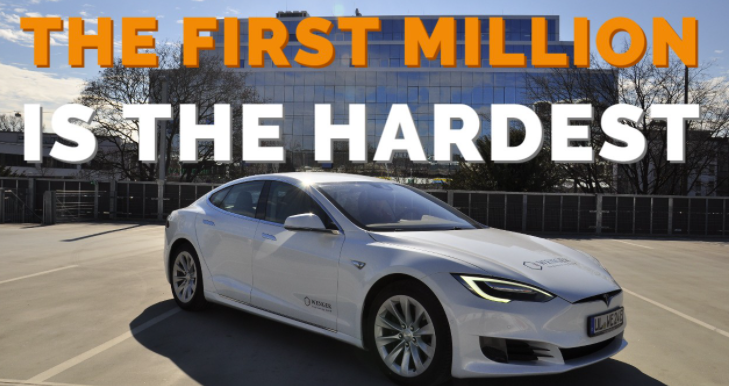 The first million is the hardest. This might be true for money, but it is also true for other things. Car manufacturing, for example.

Two months ago, Tesla has built its 1,000,000th car. They are the first car maker to reach this number. Incredible.

As you know, I have worked for one of the most prestigious OEMs in the world in my last life. I remember a meeting some 15 years ago where one of my senior managers presented an internal analysis: “A battery-electric car with a range of e.g. 500km will never exist. It’s impossible.”

There were many other things that were clear: “Lithium-Ion batteries have a higher energy density, but they are not safe enough for cars.” “Charging batteries takes hours, otherwise they get damaged.” “Those Tesla guys are crazy. They just take lots of laptop batteries and put them in a car. This will never be successful.”

Elon Musk didn’t know it‘s impossible. And that’s why he did it.

Of course, life is seemingly easier if you have billions to invest and the investors keep on waiting patiently for twenty years or more – instead of asking for dividends or at least getting into the black. And just to be clear: The emphasis of the last sentence was on “seemingly”. I don’t want to know how many times people’s nerves were on the edge in Fremont.

The German “Automotive Pope” professor Dudenhoeffer wrote in an article a few weeks ago: “To start a car maker in northern California is as difficult as starting a brewery in the desert. You have no infrastructure, no suppliers and no vehicle engineering companies.”

One million electric cars and twice the stock market value of Volkswagen. I am impressed.

And do you know what’s also impressive for me? The Model S has been on the market for eight years now, and the design is still great. No other car looks better imo, and also from the user concept, the materials and the connectivity point of view it’s the best that I know. All those self-appointed Tesla competitors are far from being there.

All I can say is: Respect, Mr Musk. What you have achieved is called “history”.

What’s your opinion? Let’s discuss it.

PS: From an ecological point of view BEVs only make sense when the electricity is generated from renewable energy and not coal or so. The probably best solution for that in Central Europe is offshore wind. However, it has surprising limits, a German-Danish study found out recently. This Wednesday (May 13) at 5pm CET (8am California, 11am New York, etc.) we’ll do a webinar on that where the research team will present their results and discuss them with you. So if you are interested in electricity generation from renewable energy or the energy transition in general, you should participate: https://event.webinarjam.com/channel/mission-hydrogen-owh (We have some 1,500 registrations, so please make sure you enter the digital auditorium on time.)