The Innovator’s Dilemma of the Automobile Industry
Published on: Nov 29, 2019 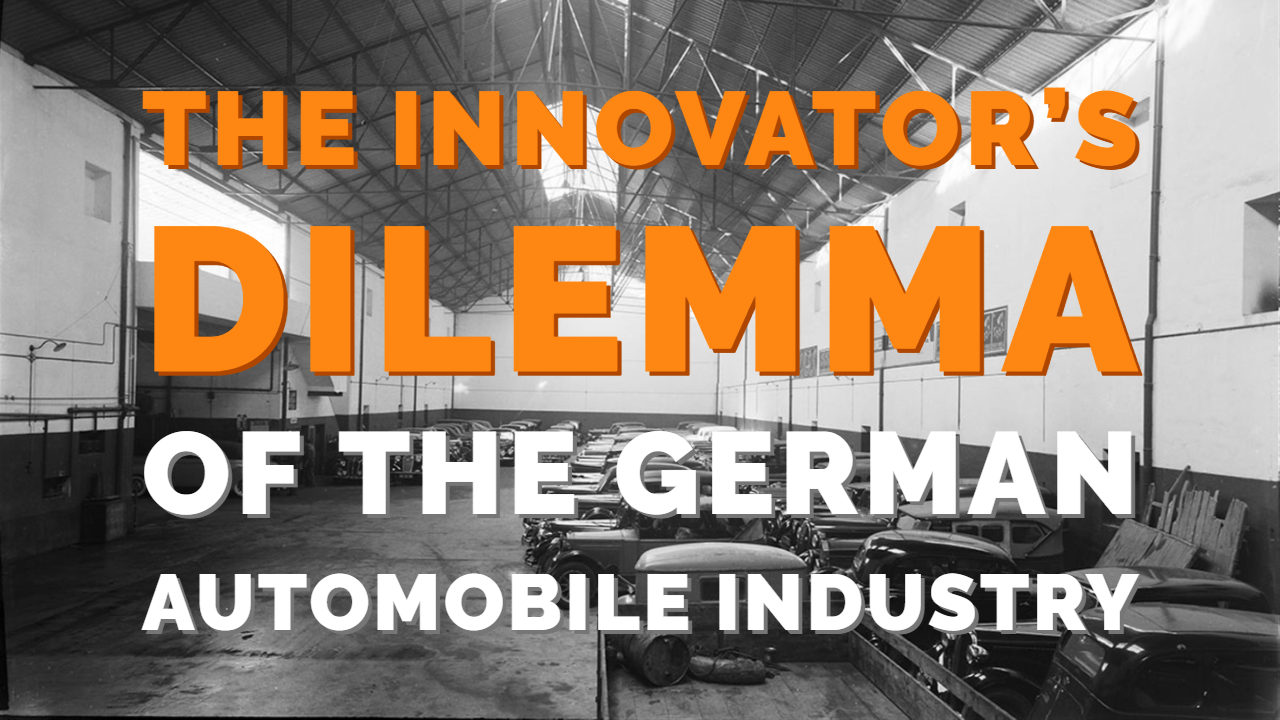 One of the most important books on innovation is called “The Innovator’s Dilemma” and was written by the Harvard professor Clayton Christensen. Christensen describes how disruption works. If I am informed correctly, Christensen is the inventor of the word “disruption” (https://amzn.to/2BX3Bs5)*.

In the book, Christensen explains the upheaval in the American steel industry more than a hundred years ago. In the 19th century, relatively few large steel companies were dominating the market. They had large factories and produced all types of steel for all applications known to man.

At some point, someone came and built a so-called “Mini-Mill” – a small steel mill that could only serve a small niche. The quality was not so good, but the steel was cheap. The big ones laughed: “What does he want? That’s not going to work! It’s much too small, the quality isn’t right, it doesn’t have this, and it doesn’t have that. He will disappear on its own. His products are not relevant to the market.”

But then the following happened: the small Mini-Mills learned, improved their quality and adapted to the market through their flexibility. The customers bought because the quality was good enough and the lower price was worth it. Today we would say: the other products were “over-engineered” and therefore too expensive. The small ones were able to expand and at some point, they left the big ones behind due to their flexibility, adaptability, better-tailored products, innovations, etc.

You don’t think so? Do you believe in the following dialogue?

Director: “Employees, do you think we need digital cameras too?”

Head of department: “No, boss, that will never come. Much too complicated. It’s all far too big, too heavy and too expensive. This is relevant only in a few niches. We have such good films that we can still optimize a lot. We talked to our customers: The market demands better films. Nobody wants a digital camera.”

Could it be that such a dialogue was conducted at Kodak, for example? And yes, to the younger of you I should explain who Kodak was… but just have a look at the history book.

Or Olympia? Once had over 10k employees who built typewriters. “No boss, computers in the office will not come. Especially not at home. Too complicated, too expensive – nobody needs that.”

Well, I’m not so arrogant to think that tomorrow all cars will be electric or even run on hydrogen. That won’t come, neither tomorrow nor later on.

But I’ll tell you this: I attended an event in Norway on hydrogen for commercial vehicles this year. It was sobering, especially from the OEMs: Either they hadn’t come at all or they explained more or less clear why this is not possible. Did they have an alternative? No. Do they have any ambitions at all to massively reduce CO2 emissions? Not intrinsically. The EU regulations force them to think. The only one who (apart from the Chinese manufacturers who are completely unknown in Europe) is really investing significantly in this direction is Hyundai.

We’ll see what happens in the next ten to twenty years. Maybe Hyundai will burn billions and everyone else will be happy at every annual general meeting when they can pay dividends to investors. But maybe not.

What is clear is that there is room for disruption. For a Tesla of the commercial vehicle market. So, if you’re looking for a new challenge, that could be something for you. Wenger Engineering will then help you with the engineering implementation. Even if you are not so ambitious personally and “only” do it as an employee of a company. 🙂

PS2: Will hydrogen come tomorrow and roll over everyone? Just to give you an example: The company Powercell from Sweden has around 40 employees and has a turnover of almost 6M euros. On the stock exchange, they are worth 350M euros, because some crackpots think they will take over the world tomorrow. I’m not one of them. I am realistic enough to know that innovation and disruption take twenty years rather than two. In this respect, even the traditional manufacturers still have time to position themselves. It would be good for the jobs in our country.

PS3: The links marked with a (*) are so-called commission links. If you click on such a link and buy via this link, I get a commission from your purchase. The price doesn’t change for you.