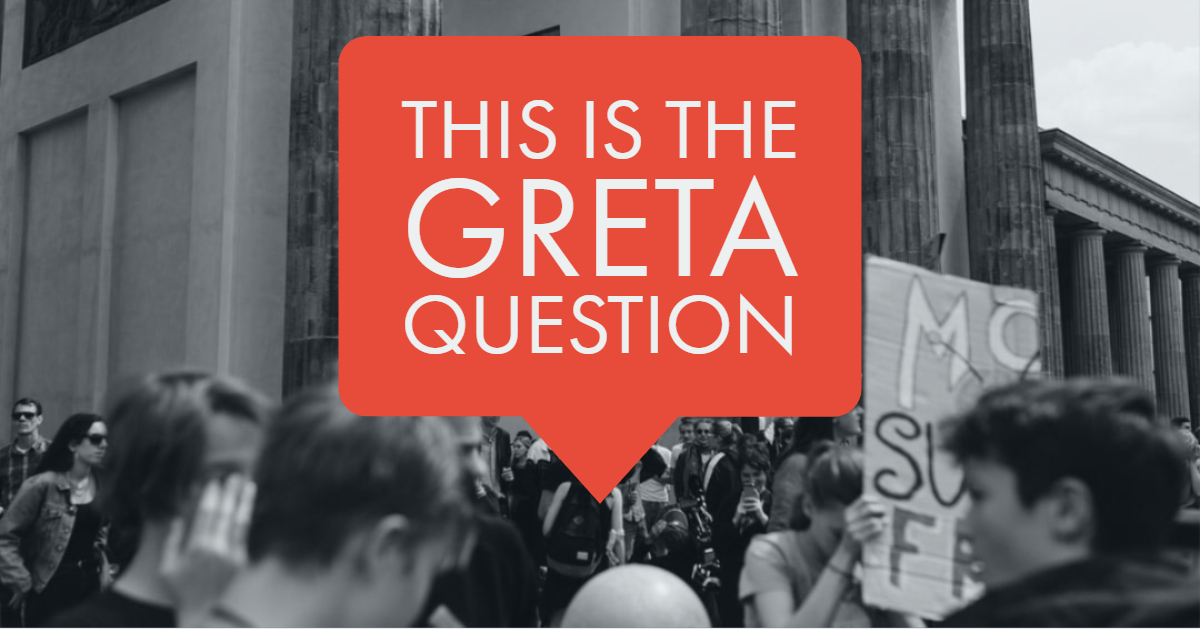 As I write these lines, Sweden-Greta sails across the great ocean to travel to a conference as climate-neutral as possible. Thanks to some super-smart journalists, we know that several people are flying over to get the boat back, and the skippers are flying back as well because they do not feel like living in a can for another few weeks.

However, that’s not the point here. It’s actually irrelevant in my opinion. Greta moves people. She mobilizes. She draws attention to things. Each of us may have his “opposite opinion”. But if we are honest with ourselves, we also know that at 16, we didn’t manage to get so many things done as her. Nobody asked me at 16 if I wanted to meet the American president. More specifically, I haven’t been asked to this day. What about you?

But that doesn’t really matter. Because the sixty-four-thousand-dollar “Greta” question is:

“Now tell me, how do you feel about climate protection? You are a very good person, but I think you do not think much of it!” (roughly quoting J. W. v. Goethe)

For my part, I am far from having a good record. I just flew to China to meet with customers and business partners. Of course, the meetings were about how zero-emission vehicles can look and function in the future. But paradoxically, to develop zero-emission vehicles, one has to fly around the globe in a Boeing 737 and burn several tons of kerosene per hour. Actually, pretty uncool even if some people would say “The plane would have flown anyway”. A mule would have been more sustainable. As with Marco Polo. Unfortunately, my project sets a different timetable than Mr Polo had back then.

The brilliant Swiss journalist Frank A. Meyer drew my attention to another, much more important “flaw” in Greta’s sailing trip: the journey is “Sponsored by Monaco”. The one co-skipper who brings Greta to her destination so selflessly is the son of some Princess from Monaco. Whereby “son” of course describes a biological relationship as well as a job title.

So, Greta surrounds herself with people who spend money that they have never earned, and who live in a country that gives the rich a chance not to pay taxes. Taxes that would be required, for example, to implement environmental measures. Monaco is a country of no model character in any way.

You see: it’s not that easy, neither for Greta nor for you and me. But it pays to think about the sixty-four-thousand-dollar-Greta question: “Now tell me, how do you feel about climate protection?” Because as always: You can’t make something out of nothing.

PS: I will report on my findings in China in a webinar. You can already remember the date: October 16, 2019, 5 PM CET (i.e. 11am EST, 8am PST, 3pm GMT). The apparent developing country has done more in the field of electric and hydrogen cars in the past few years than we have. Much more. We may be better in creating PowerPoint slides and telling what to do and what should be done. But they are better in rolling up their sleeves and just do it. Greta or not: look at it and form an opinion. Even if you consider electric cars as nonsense and refer to any academic studies. Who cares? The Chinese are doing it, and if we want to sell cars in the future, we have to come up with something.

Here is the link to the webinar registration: https://events.genndi.com/channel/hydrogeninchina