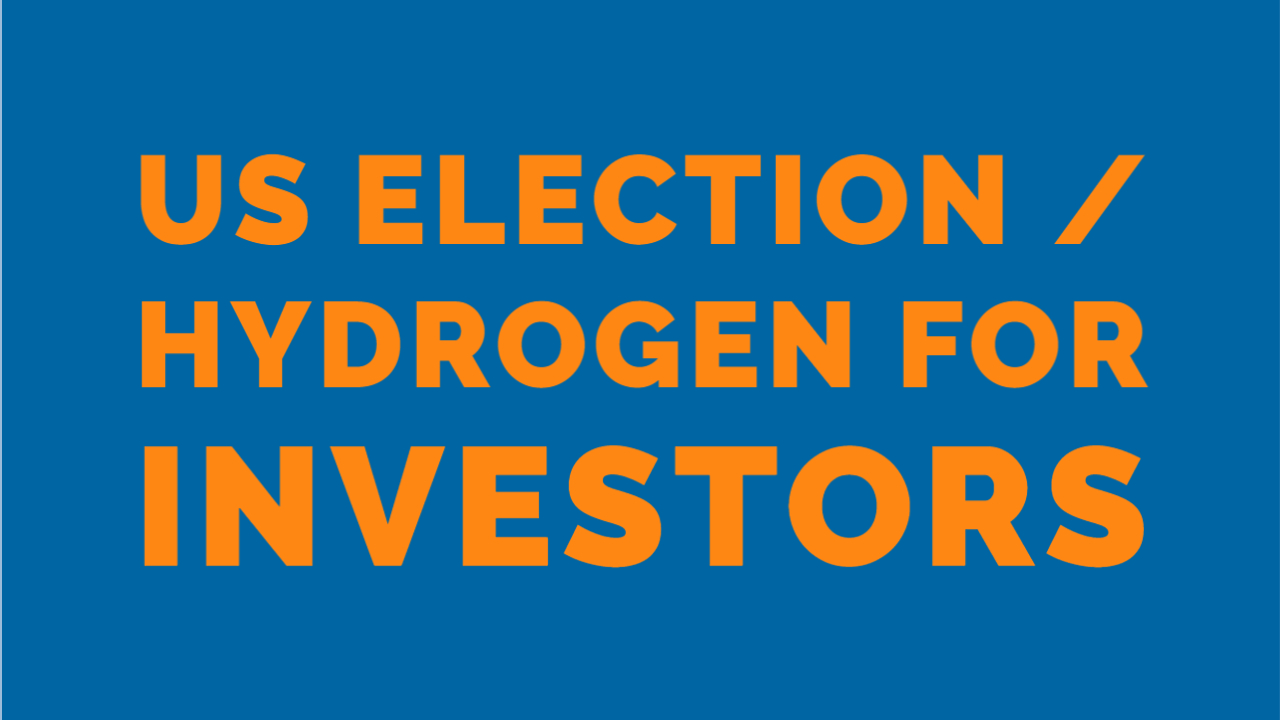 On November 3 the election for the next president takes place in the US. You know that, I know. I just wanted to say it again. I am very curious to see who will win.

I don’t want to influence the election with this e-mail. After all I’m not the Russian government so. But please allow me to make a few comments.
A highlight of the year 2020 for me was a webinar in June, which we hosted. One of the speakers was Daniel Simmons, the US Assistant Secretary of Energy.

I remember saying to my wife that morning: “I expect some kind of Mini-Trump from the US. Not from his haircut, but from his attitude. He will stand in front of a wooden podium with a government logo on it, and then he will give an America First speech, telling how he wants to become independent from the rogue states. And that renewable energies are okay, but that fracking and natural gas actually solve the problem quite well.”

The opposite was true. An incredibly likeable person was sitting there, at home in front of his laptop, with cell phone headphones in his ears. He was obviously delighted that around three thousand people from all over the world had gathered to fight a common problem – climate change. He announced that his department would invest an additional 100 M dollars in a new R&D program, and he warmly welcomed the progress that renewable energies are making worldwide.

I was impressed. And yes, of course there were some cynical comments from US citizens who found it inappropriate for him to dial in from home instead of standing on a stage in a suit and tie. (Maybe I should add that the EU Commissioner Kadri Simson, who also gave a presentation, wore an EU blue costume with EU blue earrings and seven EU flags were flying in the background… even I as a man noticed that).

At the HOC I hosted the presentation of the president of the US Hydrogen and Fuel Cells Association. There were also some political questions: “Which president would be better for renewable energies?”. Answer: Both parties support the issue equally.

I found it interesting how the (German) media dealt with the last Biden-Trump TV debate. They were talking about the “oil failure” with respect to Biden. Do you know what I mean? The question was how he would position himself with respect to energy and climate change. He said “We have to transition from the oil industry” – meaning “We need a transition away from oil, to another solution”. Trump paraphrased this immediately: “Biden wants to destroy the oil industry.” That’s certainly not true, but who will remember that?

I believe that this is Trump’s great strength: to simplify things to the point where a 12-year-old can understand everything. I am sure that many native speakers do not understand the phrase “Transition from the oil industry” either. But everyone understands “Biden wants to destroy the oil industry”, meaning “Biden wants to kill jobs immediately”. And the vote of someone who has read all the programs carefully, who has studied the subject in depth and who makes the right choice with laser precision counts just as much as the vote of someone who just says “Biden wants to take my Uncle Bill’s job away” or “Trump has the ugliest haircut since the invention of scissors”.

Either way: May the better man win.

And there’s one more thing (if you can understand some German): If you are an investor and want to know if hydrogen is a good topic for you, you can listen to a fantastic expert with a fantastic haircut:

The well-known German bank HypoVereinsbank has booked me as a guest speaker to explain the advantages of hydrogen to their customers and to answer questions in a webinar today at 6pm CET. Why don’t you just join us for free? www.onemarkets.de/de/wissen/webinare.html#

I wish you a nice day
David