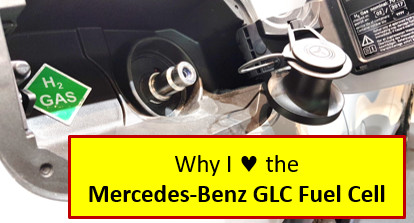 1. It is a real Mercedes. I don’t want to criticize the good old B-Class F-Cell. It was a good car with an excellent drivetrain. I used to drive it for 1.5 years, and it was reliable and everything.

But with respect to design, appeal and practicality, the GLC is a new era. You know what I mean.

2. It has a Plug-In function. Fantastic. This is the future, I’m telling you. Why? Many people drive short distances, also in winter. My daily commute to work is less than 5 km. My hydrogen consumption was huge at temperatures below zero due to the physical restrictions of freeze start and water management.

A battery does not solve all problems, but I can recharge it easily at home, while I do not have a hydrogen refueling station nearby. For short distances: perfect. And for long distances, I drive on hydrogen which can be refueled in 3 minutes. Perfect.

3. It is family friendly. That’s important for me. I am not saying the Toyota Mirai is a bad car. The opposite would be true. But for a family with two kids, the GLC is the better choice. It is bigger, and the trunk is large enough for holiday luggage.

Remember: Most engineers forget that the decision for a car is being made by the wife. 😉

4. I like the design. When I used to drive the B-Class F-Cell, I did not get special attention. The car was just too normal. It had large stickers on it saying “Zero Emission”. But 99.9% of the population didn’t care.

Some people even looked at me like “Poor guy. His company must be going south. He can only afford such a small car.”

The answer I got was typically: “Did I understand that correctly? You pay more money for a normal car with a special fuel that is very hard to get? Are you nuts?”

Anyway: While I still think that a purpose design is the only solution for a fuel cell drivetrain, I can understand that the OEMs don’t want to invest in that at the moment. With that being said, I think that the GLC with some extra design elements is a good compromise.

5. It features one of my patents. You can even see it on the picture. For NDA reasons, I am not going to disclose what it is.

However, I am proud one of my ideas has made it that far. 🙂

Anyway, I think there are two reasons NOT to buy or lease it. Maybe I am wrong, and for sure these are just my personal gut feelings at the moment.

1. The price. I have no idea what the car will cost. My gut feeling is: too much.

The Toyota Mirai leasing fee is between 600 and 900 Euros per month here in Germany (depending on the mileage etc.). In California, I would get the same car for 349 Dollars per month including fuel. I am not saying that 750 Euros per month is far off, given the investments Toyota has made and so on.

But one thing is for sure: If I have LESS convenience (small trunk, only a few stations etc.) for MORE money, I have to be a freak to do it.

We’ll see what the GLC will cost, but I’d be surprised if it was a bargain.

2. Commitment and market. When I buy a car, I always keep in mind that I will sell it again one day. So I look at the price tags for used cars and find out the loss in value for the models I am interested in.

So far, there is no real market for used fuel cell vehicles. Last week at the Electric Vehicle Symposium in Stuttgart, the (new) Head of Development from Daimler showed a slide that said: “Fuel Cell: Where it makes sense”. This is another way of saying: “Fuel Cell: We’ll see what happens and not commit to anything today. There will be no ramp up in numbers in the near future, otherwise I would tell you.”

Five positive points versus two question marks: I am still looking forward to driving it as a customer. 🙂

What do you think?