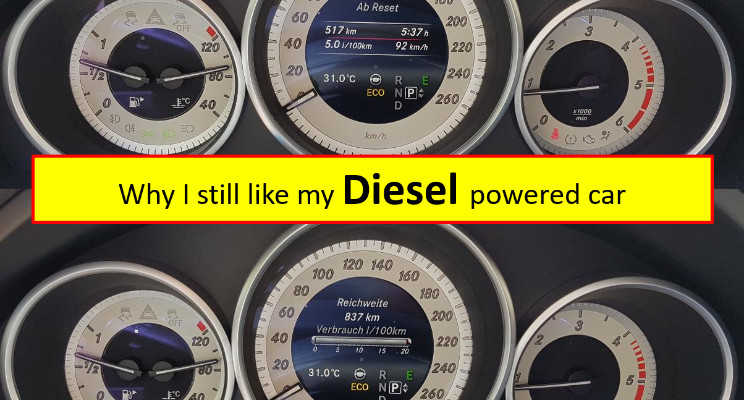 It has become unsexy to say “I still like my Diesel powered car.” People look at you as if you had just said: “I have robbed a bank.”

I have no idea if the emissions of my car meet the legal requirements. However, I believe it until someone proves the opposite. And I have no idea either if some components were developed by a so called cartel. But to be honest: I don’t care too much. The car has to be reliable, safe and efficient. And that’s definitely fulfilled.

On the picture you can see why I am still convinced: After a trip of 517 km with an average consumption of 5 Liters per 100 km, my range is still 837 km. Hence, total range equals 1354 km. 904 km more than my Tesla. A factor of three. With four persons and a trunk full of holiday luggage.

Yes, it’s a Mercedes-Benz E-Class. A fantastic car. Maybe it would have been better to take the gasoline version. But still: a range of 1300km with one tank is an exceptional value.

I doubt that any EV will ever be better than that.